The story of The Nutcracker and the Mouse King (written by E. T. A. Hoffmann (1816), adapted by  Alexandre Dumas and set to music by Pyotr Ilyich Tchaikovsky in 1892) has become one of the most popular ballet performances around Christmas time in the world. It is appealing to children and adults alike and has been a standard Christmas feature of theaters in many countries.

Russian Nutcrackers are large and small carved wood figurines. As collector pieces they became popular rather recently -- in the last two or three decades.

In Russia there are more painters than carvers. And very few- very good carvers. Each painter keeps his acquaintance with his carver a secret.  Not every carver would carve a figurine of a nutcracker. Making a opening and closing mouth of the nutcracker is the most difficult part in the nutcracker carving. That is why a Russian hand carved nutcracker and a German machine made nutcracker are two different things. Russian nutcracker carvings are made by hand out of solid linden wood, and then hand painted and decorated.

In 2019 our firm launched (we are very grateful to A. Merza, a vivid collector of wooden nutcrackers for sharing his ideas and pictures), a series of 12 different nutcrackers standing on the drum. As a result of this scrupulous work we came up with one of a kind figurines of museum quality, flawless in craft and unique in design. They are carved and decorated by hand with fine burning on wood. Every one of them are flowless in quality and unique in design piecees of art.

Every single Nutcracker of this series represents either a Political Dignitary, Military Commander, Russian Czar or Just a historic figure, like Cuirrassier, for example, and shows real Heroes of glorious battles fought by Russians for their survival and independence - through long centuries of Russian history!

With our work we pay tribute to them. 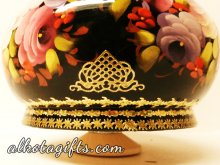