Russian Rolly-Polly, called in Russia Nevalyazhka, or Vanka-Vstanka is a popular Russian doll. Instead of different people, or nests inside witch can be opened in Matryoshka doll, Nevalyazhka has a bell inside and makes sound if you touch it or play with it. Russian nevalyashkas appeared in some parts of the European Russia in the beginning of the 20th century and quickly grew in popularity along with the rise of Matryoshka nesting dolls. The process of making a Russian Rolly-Polly involves making a blank out of wood, taking off the wood from the inside of the blank, putting a bell inside, glueing both parts (upper and lower) together and finally painting it. In the beginnning images portrayed on the Russian Bell, or charm doll were Russian village ladies in traditional Russian gowns. Later it became popular to paint different subject matter, including birds, animals. In between animals cats, as perhaps the most acclaimed house animal in the world and also in Russia, are the most popular on the Russian Rolly-Polly. The artistry of the Music dolls vary tremendously - from popular but inexpensive items to one-of-a-kind master pieces made and painted uniquely just once. Some of Russian Rolly-Polly Nevalyashka even include semi precious stones in the wood structure. 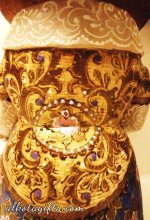