"Semenovo" doll is a very popular nesting doll. The popularity of it is so high that it became one of the symbols of Russia. Things like balalaika, Russian samovar, Russian troika and Semenovo doll are worldly known.

"Semenovo" doll is painted in bright red and yellow leafes and flowers with yellow background. The doll carries a famous red scarf on the head. You can see an apron on the front of the doll. The tradition started in the 20th century and was based on the art of the wooden craft  "Khokhloma" established in Russia in the beginning of the 17th century by "Old Believers", a religious movement (later a sect), who fled big cities of Russia to avoid the religious and administrative persecution. Those people used their skills and knowledge of icon painting and decoration and invented the art of carving furniture, toys and gifts and decorating those with bright patterns of flowers and leafes. 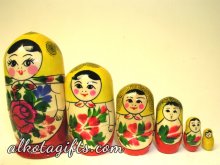 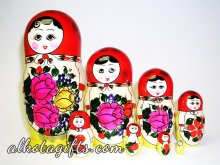 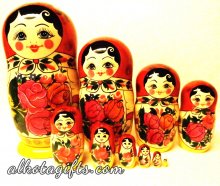