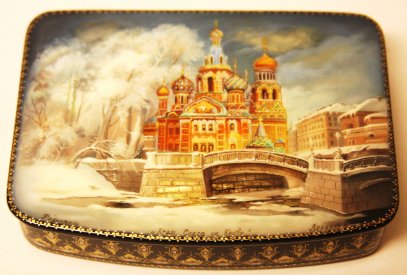 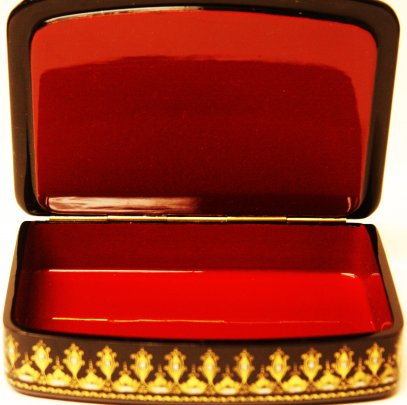 "Cathedral of the Savior on-the-Spilled-Blood"

This lacquer box is crafted by hand in the village of Fedoskino, one of the four most famous places for this art. Fedoskino is known for its frequent use of mother -of -pearl (river shell) which is masterfully inlaid in the structure of the paper mache (making emphasis to the subject matter), the material the box is composed of. Therefore it is actually a much more time consuming and complicated technique, and as a result higher value and price. Unique, no repetition in details of the composition.

The Cathedral was commissioned by Romanov family in 1881 the year of the assassination of the Russian Czar Alexander II which took place on March 1, 19881. It was erected 27 years later on the same place the killing occurred. According to the wish of the family he architect placed the altar of the Cathedral exactly on the spot where the carriage with Alexander exploded.