Russian wooden animals carvings we carry in our collection are rare carving figurines. From 15th- 16th century Russia was "a Bear's country" in the minds of Europeans traveling to this land. Bears were in abundance, even walked on the streets at that time, were used by Ivan the Terrible to rip apart his opponents during festivities and celebrations. That planted fear and spread rumours all over the world about Russia. Since the bear became a frequent participant in Russian fairytale's events, Russian bear figurine became a popular object of decoration and work. Since Russian bear is always a good character in the Russian sayings, bilini (people's stories) and folktales, bears wooden carvings are always made with the kind face, smiling, frequently carrying and playing a musical instrument, mostly balalaika. Cats and frogs wooden carvings presented below are works of unique and time consuming technique. First, the subject matter is traced with pencil on the carving. Then the artist burnes the trace with magnifying glass with a special burning device. Finally the paint is applied. Because of the complicated approach and time only few Russian artists make this type of work. We are glad to work with one of them - Yuri Grishin. Many of the pieces you see are his works. 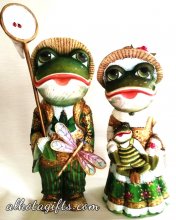