Russian Santas' popularity explains a vast variety of Russian Santas figurines. One of the most popular and beloved styles is Santa with decorated with landscape subject matter- intricately painted by hand on the body of Santa Claus. Initially the artists painted scenes on the back of the figurine. Later they switched to the front. The most expensive carvings have pictures painted on the front and the back and therefore are considered valuable. An artists painting such a carving could spend months on one figurine. The carver "waits up to five years to let the log dry before he carves. So, there are many justifications for high price and value!

Russians love nature. They like going to the outskirts of the cities and celebrate holidays. Russian people also love and respect their history. Many Russian Santas statues carry images of historic architectural buildings, such as churches and cathedrals, which were erected in different periods of Russian tumultuos past. Other Santa figurines reflect winter landscapes, scenes with riding troikas, children making a snowman and much more. All  these and other  themes are created by hand by Russian artists on wooden carvings of Russian Ded Moroz (Santa Claus). 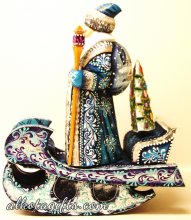 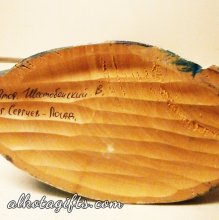 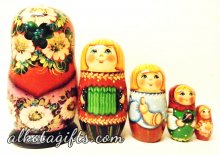 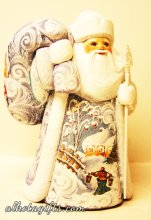