Russian Santas or Ded Moroz in Russian pronunciation, (Old Man Frost-exact translation) is a fictional character in Russian fairytales and folktales who plays in Russian culture a role of western Santa. Ded Moroz is portrayed in different forms, shapes, depending practically on the fantasy of the carver and the artist.

Usually one figurine of Russian Santa is the work of two people. One is carver , another one is painter. Unsually the artist (painter) commissions the carving work to the carver. The carver chooses a log. It should be a dry wood, not less than a year of laying and "waiting". Big carvings are made after 5 years of "waiting". A skilled carver, responsible for his work always has logs of wood which he prepares and dries- all the time!. After the carvings is made here comes the turn of the painter. He chooses the subject matter based on either an order he already has, or the popularity of the scene. There is a big demand on Santa carvings which show Ded Moroz (Russian Santa Claus) carrying or playing musical instruments. The reason for that is two fold. We, Russians love music and appreciate it, and understand it. Traditionally many of us teach music to our children and let them familiarize with the history of Russian culture which is unseparable from the history of Russian music. Russian Santas playing a musical instrument is a beautiful gift to a family member which could last forever! 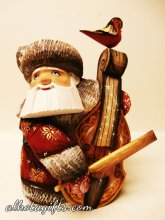